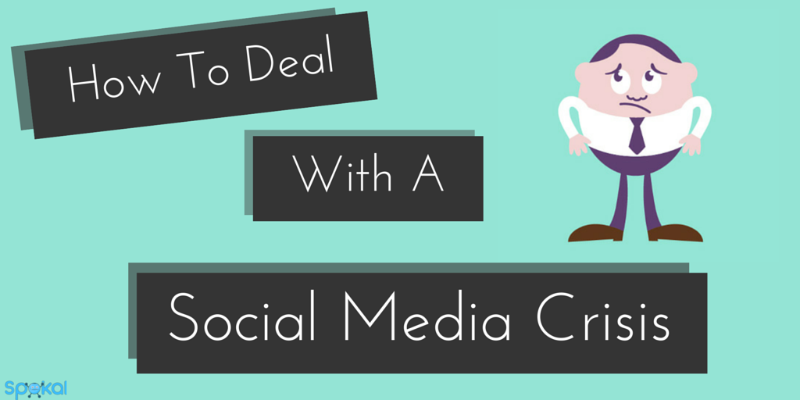 The rise of social media has meant that businesses are at the mercy of public criticism like never before. In this day and age, if you slip up, there’s nowhere to hide.

In Chinese, the word “crisis” is made up of the two words “danger” and “opportunity”. For every danger that a crisis presents, it also presents you with an opportunity to show the world what you (and your business) are made of. 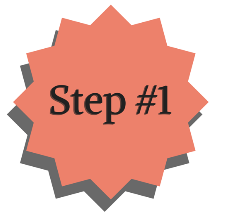 Decide Whether Your Response Will Be Outbound or Inbound

Not every business is going to be able to respond to a crisis in the same way. Each business has different resources, different levels of manpower and different priorities. You need to know what your capacities for responding to a social media crisis are.

After answering these questions, you’ll be able to figure out which of the two response strategies to take: Outbound or Inbound.

Adopting an outbound strategy means that, in the event of a social media crisis, you will plan to reach out to your audience on the various social media platforms that your business operates on. This is more of a one-to-one basis as you respond to questions and comments directly.

Because reaching out takes a lot more manpower, this works best if you have a dedicated team of social media experts, and someone who is always monitoring the social media platforms.

An inbound strategy requires a lot less monitoring, and therefore, less manpower. It is therefore more effective if you have a small or inexperienced social media team (or, perhaps, none at all!) or your business isn’t particularly active on social media.

An Example of an Outbound Social Media Crisis Response Strategy

In 2012 O2 (the second largest telecommunications company in the UK) had a 24 hour blackout crisis.

Customers couldn’t send or receive texts or phone calls at all. You can imagine the nightmare.

However, O2, which already had an established presence on Twitter and a relationship built up with their customers, took to Twitter to respond to their customers grievances.

Not only did the social media team respond to a majority of the tweets that were directed at them, they also responded with sense of humour that turned the overwhelmingly negative 1.7million tweets into a positive. 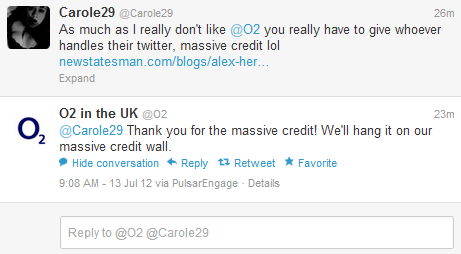 In this case, reaching out is impractical and trying to emulate the likes of O2 will probably result in failure.

As a B2B operation, BP had no social media engagement to speak of, a relatively small and inexperienced social media team and no established relationship with the public. But when the Deepwater Horizon accident occurred in 2010, the internet erupted.

An outbound strategy simply wouldn’t have worked effectively for BP, so instead they chose to rely on a single website. On the website they were determined to create a transparent and informative resource for people to go to for information regarding the incident, including news, updates on the investigation and information regarding what’s being done to rectify the environment and the economy.

Decide Who Takes Control in a Social Media Crisis

A 24/7 social media crisis response team may be unattainable for most businesses, especially small to medium sized ones, but a Social Media Committee isn’t.

Many larger businesses form a variety of different committees that convene weekly, monthly, bimonthly… Whatever works best! The Social Media Committee isn’t just for a crisis, of course. They can analyse your social media efforts, plan new campaigns, schedule social media sharing and distribution for the following weeks. But most importantly, they can also be instructed to arrange for a social media crisis response strategy.

This means knowing what platforms your statements will reach out. Having a set of numbers available in a directory that anyone can call in a crisis (for example: A lawyer, the CEO and Managers.) and knowing who will take the lead if a crisis breaks out.

If your business is too small for committees, appoint a Social Media Manager. They will do a similar job as the above committee, albeit solo and on a smaller scale, but will also be appointed with the authority to take the lead in a social media crisis.

This is the person who will take the reins on the social media platforms and respond to the crisis on social media. They’ll have to know the business inside out, what strategies to employ when a crisis hits, what are the necessary steps that they need to take to put this strategy in play, as well as having great interpersonal and PR skills. It’s a big ask, but they will be the voice of the company on social media if/when things go wrong, so nothing less will do.

Kitchen Aid as an example of a company with a hard striking and well planned social media crisis response plan, and most importantly: The right person to execute it.

When a team member at Kitchen Aid accidently sent out an offensive tweet regarding Barack Obama and his late grandmother, all hell broke loose.

They responded with a brand apology in just 8 minutes, earning them top marks for speed! 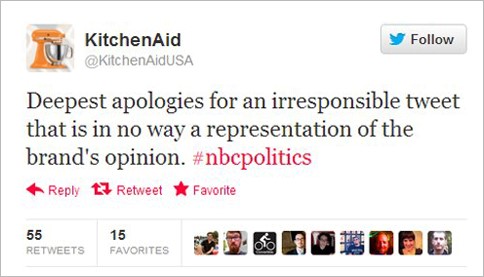 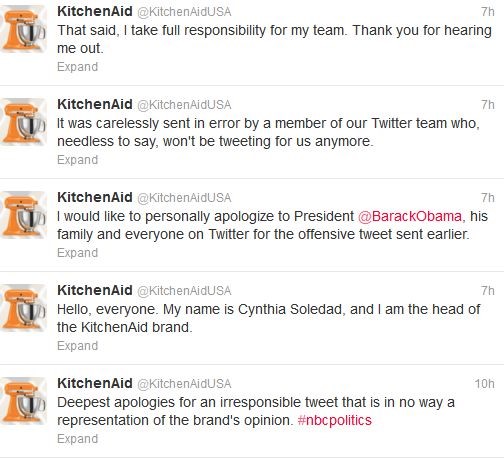 Do you or someone on your team have that delegated authority to reach out like this should the need arise? 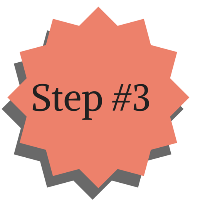 When the crisis does hit, it’s important to act quickly.

Don’t delay, even if your information is incomplete. Delaying or trying to cover up information, like Sony did when they lost 77 million credit card details, generally results in even more criticism and can itself cause more damage than the initial crisis.

But what are you supposed to even say?

While it’s tempting to hold back until the details of the crisis have been worked out, this is a rookie mistake. You don’t need to know the details to send out a general statement letting everyone know that you are in the midst of looking for answers and details around the incident.

Sending out a preliminary statement will let people know that you’ve been alerted. Staying silent will just allow the fire to take hold.

An Example of a Business that Acted Quickly & Stayed Engaged

When DiGiorno Pizza hopped on to the trending hashtag #WhyIStayed, they had no idea that the hashtag was in relation to domestic abuse. 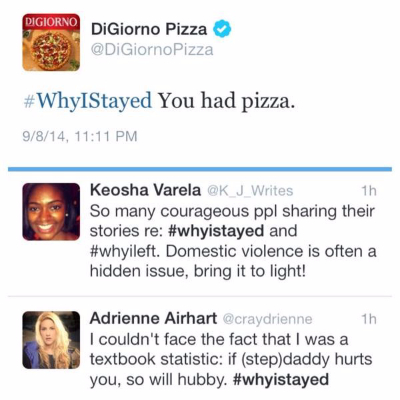 It took them exactly 4 minutes to recognize the mistake and make a public apology. 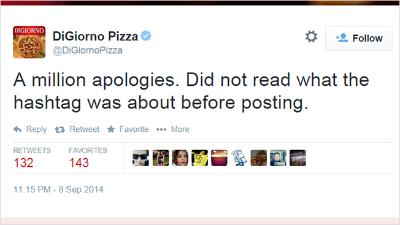 Not only that, but they stayed engaged in the conversation. They replied to the outrage, the apologized to each individual personally and they showed true remorse for the mistake. 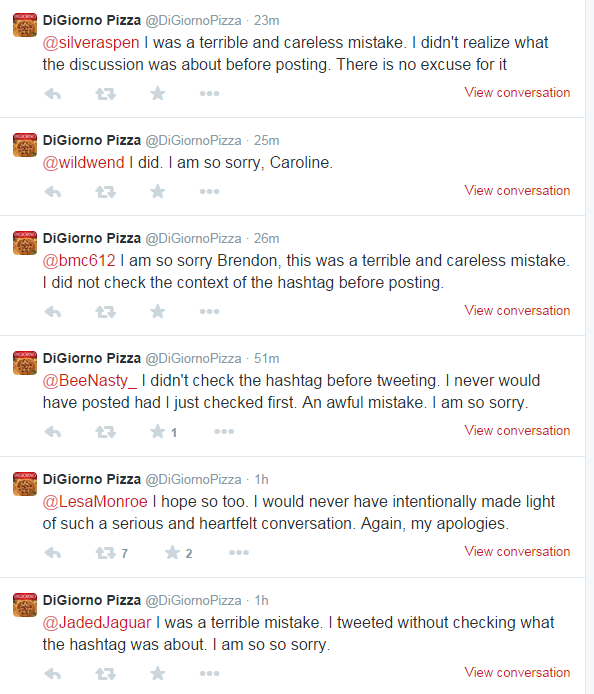 Ensuring that you have someone to take the reins quickly and stay engaged throughout the crisis stage is extremely important. A quick blanket apology is a start, but staying engaged is what will smooth things over. 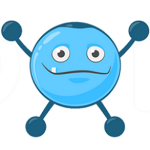 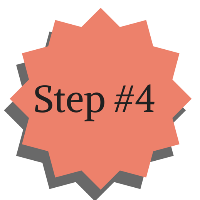 Don’t Shy Away From the Facts

Social media is very good at making businesses a lot more transparent to their customers, which is usually a positive thing. However, in times of crisis it means that you have to suck it up and face the reality.

Do not embellish the truth. Do not cover up the facts. Do not make excuses to avoid taking responsibility.

Whistle blowers are quick to call you out on your lies, and being caught out lying will just add more fuel to your fire.

An Example of a Business That Wouldn’t Face Facts

Karen Millen came under fire recently for their poor customer service. Streams of complaints were coming in about the retailer stealing money, not offering refunds and taking too long to reply. 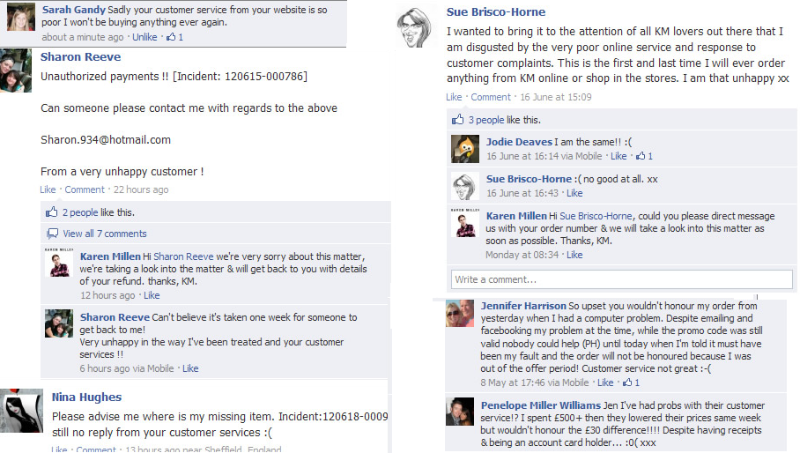 But instead of admitting that they were having issues, or explaining what the issues were, Karen Millen tried to breeze on by as if nothing had happened. 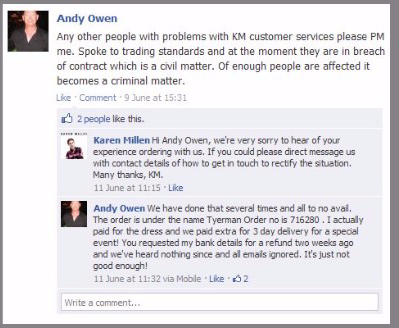 Not facing up to the facts won’t do you any favours. Face them head on and resolve them to the best of your abilities. People are less likely to get hostile if you at least try to explain what the situation is. 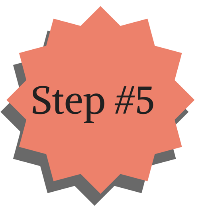 Spread the Word with a Public Statement

While old-school PR suggests that you lay low until the heat blows over, social media doesn’t give you that luxury. Laying low through a social media crisis only fans those flames, so you can’t ignore it.

You need to be instrumental in the crisis, and that means spreading the word as to what has happened and what steps you’re taking to fix it. This ensures that no misconceptions, rumours or incorrect interpretations are made.

A public statement is the ideal way to get your side of the story out into the public, and it gives you a great opportunity to take control of the situation.

The first step to crafting the perfect first public statement is to show you’re a real human being.

You’re not a business right now. You’ve made a mistake. You’re flawed. Don’t try and hide that. Instead, appeal to people’s sense of humanity.

It’s important to show sensitivity, and humility if it’s appropriate, and remember the 5Cs:

An Example of a Great Public Statement

Tesco had a huge crisis recently when horse meat was found in some of three of their product. The find was shocking, but Tesco didn’t hide from it.

Instead, they released a statement in the form of an advertisement that was perfectly on point. 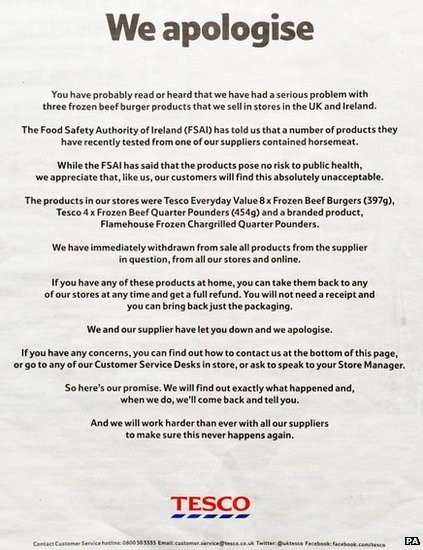 In its advertisement Tesco showed concern for the distaste that their customers might feel about the situation, a commitment to finding out how the incident occurred in the first place, control over the situation by offering refunds under any and all circumstances and communication by offering to tell the public what happened when they have found out:

“We and our supplier have let you down and we apologise… So here’s our promise. We will find out exactly what happened and, when we do, we’ll come back and tell you”. 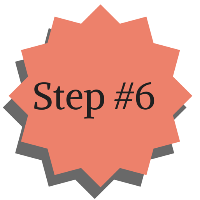 Just because the dust has settled on social media platforms, doesn’t mean your work is over. Find answers, and report back, like you promised.

Crisis’ have a way of sticking in the public’s mind. They don’t forget it very easily, and if you’ve promised results, they will come looking for them eventually. Avoid a second round of criticism by delivering on your promises.

But delivering on your word isn’t just about stopped the mob from reforming. It’s also about ensuring that it never happens again. At the root of any crisis, there is a trigger that sets everything in motion. It’s likely to be triggered again if your business doesn’t deal with it in a timely and appropriate manner.

Different crisis’ take different lengths of times to recover from.

However, if you have engaged with your customers through social media during the crisis, don’t suddenly stop engaging once it’s over. Being consistent is an important factor to regaining trust, and will help you bounce back from this crisis faster.

If you liked this, you might also want to check out…